Margaret wants a pink hat. Once upon a time her favorite color was orange, but then she started attending preschool and the pink mind-control rays were just too much. So pink is the preferred color. I have managed to logic her into accepting red too, by pointing out the basic truth that red is actually dark pink. Some people would state this as pink really being light red, but those are people who do not have a little girl in their lives.

Duncan also used to love orange, but he now likes blue best. We have made no effort to steer him away from blue. Go blue.

Martin has yet to express a color preference. 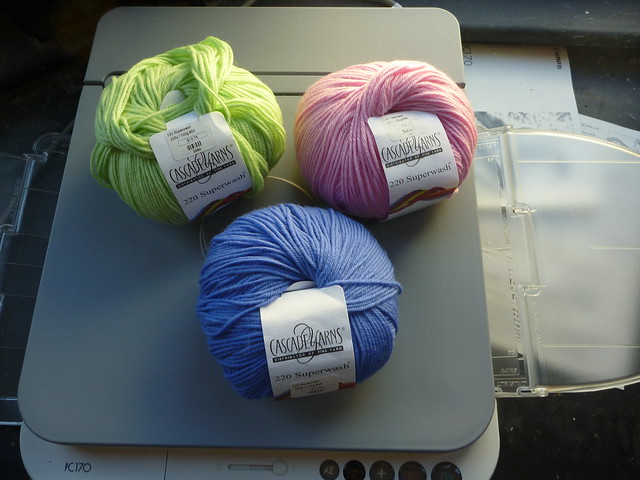 Back when I first needed storage thingies to sort Margaret's toys from Duncan's toys I went to target and bought two canvas storage thingies, one in pink and one in blue. Now that Martin is on the scene we also have a green one. I chose green because the if I was sticking to a unique color for each kid and cream for shared stuff then my options were green or purple and I am enough of a gender conformist to not pick purple for a boy not yet old enough to ask for it. Somehow, though, this color scheme has been adopted as The Way. Now Margaret stuff is pink (possibly really dark pink), Duncan stuff is blue, and Martin stuff is green.

Margaret wants a new winter hat, in pink of course. Given our loss rate on hats I figure a new hat for everyone is a good idea, so I took the kids to Mind's Eye Yarns, and let Margaret and Duncan choose the yarn for their hats, and let them help choose a color for Martin. The Mind's Eye staff helpfully pointed them at the Cascade 220 superwash, and sure enough we ended up with a ball of pink, a ball of blue, and a ball of green. I sure hope Martin is accepting of green as his color, because he may be stuck with it for the next several years.
Collapse