Hand-knit wool socks really are quite nice on a rainy, chilly morning.

I haven’t done a yarn post in ages. I was doing them monthly, but then last spring I lost my knitting/crocheting mojo for a little while, and while the mojo came back, the monthly yarn updates didn’t. Now I feel like posting a yarn update, leading with socks of all things.

I’m not really a sock knitter. In fact, until I was pregnant with Margaret the closest I came to making socks was doing some felted booties as a means to turn leftover scraps of bulky or aran weight wool into gift items. It’s not that I don’t like socks, I just don’t wear them much at all. My wardrobe consists nearly entirely of skirts and dresses, so I wear tights. At least I wear tights when I can.

When I was pregnant with Margaret I started to learn the many betrayals of maternity tights. Since I am a dress wearer, maternity dresses seemed the way to go, except that left me in need of tights that fit. I quickly found that maternity tights are insanely expensive, and that they do not work well. The opaque variety just aren’t stretchy enough up top and by sixteen weeks in they seem no different than regular tights. The sheer variety just don’t survive for more than one wearing. I’m used to getting a few dozen uses out of a pair of sheer tights that costs me about a quarter of what maternity sheers do. I learned that buying plus sized tights will work through the second trimester so long and I don’t mind the waistband of the tights ending around my lower ribcage, but for the third trimester I needed another solution, and that was when I knit a few pairs of socks.

My first pair of socks taught me an important lesson: the standard hand-knit sock cuff length does not work with my calf shape. I need to have either socks that end somewhere around my ankle, or I need knee socks with lots of calf shaping. I quickly knit up two pairs of socks in a pretty little anklet pattern, and these served me well during the last few weeks of my pregnancy with Margaret. They also got some wear during winters when wearing wool socks over my tights was a good way to keep warm, and of course when I was pregnant with Duncan they got worn with some sock-yarn leg warmers that I’d made previously. Sadly, both these pairs of socks have developed huge holes in the heels and I had to throw them out. I do have two pairs of stranded color-work knee socks that I’ve made, but those were made for wearing over tights on sub-zero winter days and aren’t what I want for wearing while heavily pregnant during the summer. Now I need to replace the anklets, with a few extra for good measure.

I completed my first pair or replacement pregnancy anklets just over a week ago, and I’m enjoying them for the second wearing today. 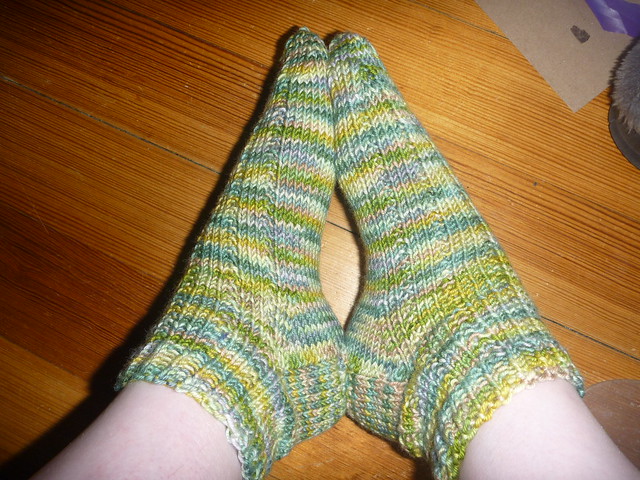 These are made from Socks that Rock Heavyweight in Green-Eyed Monster that I had left over from a sweater I knit for Duncan. The pattern is the Thuja pattern from the Knitty archive, converted to an anklet by just knitting less leg. I chose the pattern based on the yarn I had, with the help of a ravelry search to find sock patterns that other users found worked well for the STR HW. I have three more skeins of STR HW on order to make more socks, either with the same pattern or one of the other popular free patterns for this yarn. I’m sticking with the same yarn (in different colors) because socks knit up really quickly in the heavier yarn, it is very suitable for their expected post-pregnancy usage as an extra layer of warmth, and because I have a long, ongoing project for STR HW is assorted colors. 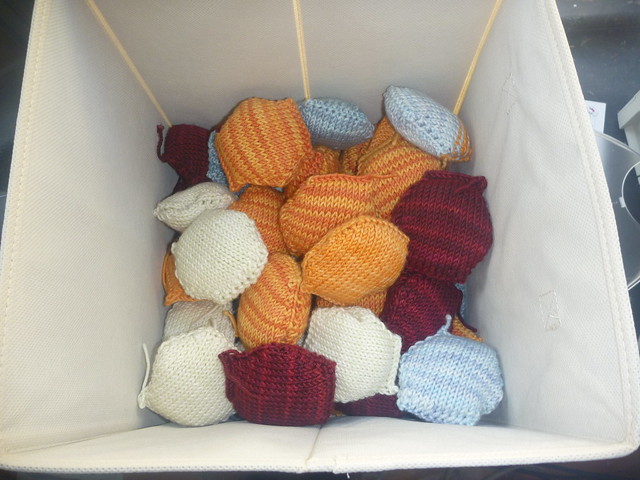 Hexapuffs are a craze that is sweeping ravelry. The official pattern name is the Beekeeper’s Quilt. The pattern calls for leftover sock yarn. Technically, I am using sock yarn, since Socks that Rock Heavyweight is meant for socks, but most sock yarn is classified as fingering or sport weight, and the STR HW is a noticeably heavier DK weight. I just happened to have a lot of STR HW leftovers at the time the craze hit, and it’s a blanket so gage shouldn’t matter. Warren noticed the box of hexapuffs sitting on the floor the other day and asked what they were for. I explained, and he took another look at the thick, polyfill-stuffed hexagon he was holding and observed that it would be a very warm quilt. “It’s for Duncan,” I replied. That was all I needed to say.

I’ve only just started knitting for this baby. I wanted to be sure he was healthy first. It’s late to be getting started, but I’m pretty sure I can get his blanket, a couple of sweaters and a hat or two done in time. I’m about halfway done with a sweater now. I need to get started on the seed stitch blanket of doom soon. I took one of those to the hospital for Margaret and for Duncan, and it’s become important to me that each of my babies have their own.
Collapse