Yes, they are late, but it's been a hectic weekend. Margaret is getting her very first tooth, Warren's mother is visiting, and work was crazy. Of course the birthday girl was beautiful... 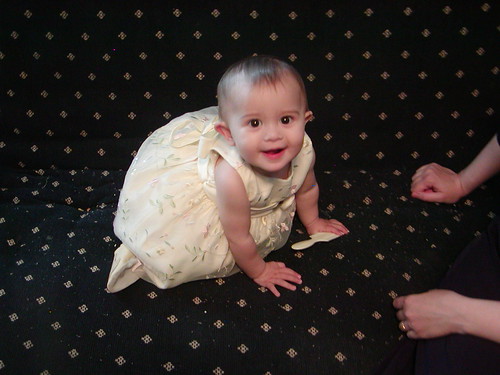 ... and the big present was very well received... 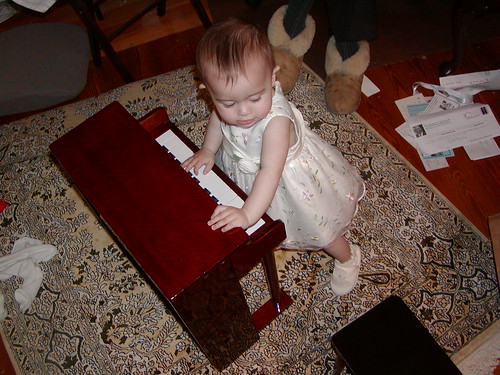 ... so everything was fine in the end.

We just got back from the second ultrasound. The embyro is doing well, measuring 7 weeks 5 days and with a heartbeat of 154. There is a slight sac separation, which our doctor doesn't think is a cause for concern, and there is still the second empty sac, ditto. I'm still a little bummed about not getting twins this time around, but I'm really happy about the good measurements. My body seems to have a one-baby-per-pregnancy rule or something. We have officially graduated to a regular OB.

Back in September 2002 when I purchased my Jetta my plan was to drive the thing until it fell apart. I pretty darn happy with the car, I like the way it drives, and I could happily keep it for a good long time.

The thing is, back when I bought it I was laboring under a couple of misconceptions. The first was that I would have a kid in a couple of years, and we know how that turned out. The second was that I could easily fit three kids in the back seat. This is also an error in judgment, though less obviously so, unless you currently have young children.

You see, when I was thinking of children and car size I was thinking back to my own early childhood. At the time my sister was born the only car the family owned was Dad's dark blue VW beetle. In my opinion at the time, it fit a family of four quite nicely. Being much shorter back then, I actually had plenty of leg room in the back, and Margaret was smaller still. My Jetta is huge in comparison to the old bug, surely it would be plenty big enough at least until we had that third child we wanted. What I failed to consider was the full impact of today's different safety standards. When Margaret was born, I remember waking in the back seat of the beetle as Dad drove to the hospital, but it took me a while to figure out where I was because my Dad had laid me down on the seat as though I was sleeping in a couch, a stunt that would no doubt earn him a fine and a stern talking to if he were caught trying it in this day and age. Also, Margaret went home from the hospital in my Mom's arms, ditto with the fine and the lecture. Today's kids ride in car seats from the time they are born until they're practically ready for puberty, and car seats are bulky.

In theory my Jetta seats five. In practice, if two of the back seat passengers are in car seats, there is no way anyone else is fitting in that back seat, not to mention the front passenger seat is pushed most of the way forward to make room for the back-facing infant seat. We could manage it that way, but then if we wanted to take our au pair with us (like we're supposed to do if we travel), then we're in trouble. Thus I am considering purchasing that ultimate vehicular symbol of motherhood, a minivan.

Timing is a question. Right now dealerships are desperate and offering good deals. We took a peak at the Honda Odyssey on Saturday. Actually it turned out to be more than a peak because the sales department had a bit of an aura of desperation about it. Also, I've received mailings from both a VW dealership and a Nissan dealership basically saying 'please trade-in your old car with us, we want your car for resale.' So, in theory if I acted in the near future I might be able to get some good deals. On the other hand Warren's current contract is likely to go away at any time. We can't really complain about that, given how very long he has been there, but it's still a cause for concern given that the president, congress, and even the federal reserve are all doing their very best to make a bad economic situation even worse. Seriously, if anyone in Washington seemed to have an ounce of sense I'd figure the current downturn would be turned around by the time the baby is due and I just wouldn't worry about it, but given that the folks in charge have such a firm track record of making the worst possible economic decision at any given point I find that my personal consumer confidence is not what it could be.

If you have any advice or thoughts on when and whether a minivan in needed and on specific models feel free to chime in.
Collapse