Wednesday's Beta was over 2300, which is good news. Next stop is an early ultrasound on the 10th.

Why aren't I posting the exact number? Well, that would be because the exact number is on a post-it note on my desk where I left it when the backup daycare called saying the Margaret was running a fever. After I picked her up there was a lot of puking, and no keeping stuff down, and after over 12 hours with no wet diaper I decided to call her doctor to see if I should bring her in and they told me to take her to Children's Hospital instead. So I got to spend several hours yesterday doing that. After some anti-nausea medication she is doing much better, but needless to say I am not going into work today. I'll be staying home next week to cover the second week of Jomkwan's vacation. So I won't have the exact number soon, but it is there waiting for me on my desk.

And now for the non medical portion of today's post: It's time for Salsa in China's fashion Friday. Here is Margaret's choice: 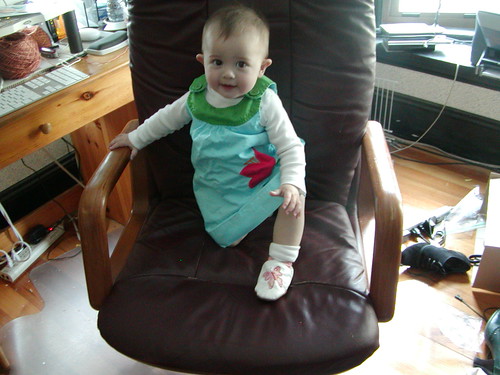 She loves that blue dress.

Updated to add: According to the