I should have posted something about the holidays much sooner, but I've been busy working and enjoying my baby. I'll be brief.

The winter holidays are not fired.

Back in December 2006 they were in serious danger of being fired. My first IVF failed and my mother was hospitalized and came out with some liver damage and minus a gall bladder. Not a good year. December 2007 was much better. I was pregnant, and on the 20th we trekked out to the Longwood medical area and back for the first big ultrasound, getting a cab back in the snowstorm was not so easy, but we had a healthy fetus. We spent the holidays alone, which wasn't so merry, but still... healthy fetus.

December 2008 was much better. Same big snowstorm at the solstice as the previous year, only more so. The 19th was Margaret's six-month checkup, then we stayed up for the winter solstice on the night of the 20th. We had enough friends over that Warren cooked a second roast because he was afraid of running out of dinner, and we got in a game of Trias before the last of the friends left. My parents were over for Christmas, and what I lacked in time off for the holiday was made up for in pleasant company. It wasn't over the top in the loot department, unless you happened to be a certain cute baby. I had a good time. 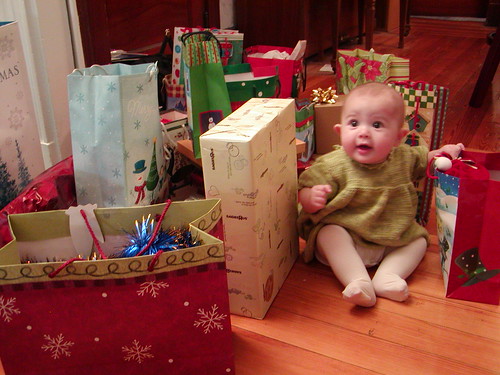 I did not stay up on New Year's eve, but I probably wouldn't have even without a baby who is still getting up two to four times a night. What I did do was spend all of yesterday playing with my baby, which has much more to recommend it in my opinion.
Collapse