One year ago. It was a beautiful fall day, by my standards anyway. Comfortable sweater weather, a grey overcast, and the foliage was starting to turn along route 2 as we drove to the retrieval for IVF #4.

Later that day, in what I am sure was a cozy and romantic petri dish, sperm and egg came together. 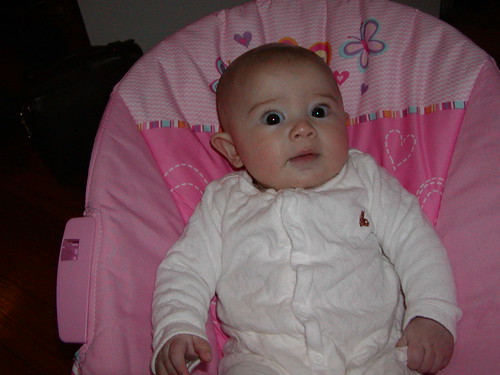 We interrupt this infertility-turned-mommy blog to post about economics.

Given the current economic issues, Warren and I have been discussing economics recently. If you're interested in an analytical view of these things, you might want to check his blog out (

psychohist) if you don't currently read it. Anyway, it came up in discussion last night that Bernanke believes that depressions are caused by a lack of confidence.

So, upon hearing this theory I immediately dubbed it the Wile E. Coyote theory of economics. (I suspect that I am probably not the first to do so, it just seems such an obvious label.) I suppose that if you believe that confidence is the only issue then the huge bailout makes some sort of sense. Sort of. Thinking about it, I even have to agree that financial markets tend to follow cartoon physics more than reality. The market really doesn't tend to plummet until people realize that they've run off a cliff. The thing is, I don't believe that you can avoid falling by tricking people into never looking down. Sure, you can do it for a while, but if you've run off a cliff people are going to notice sooner or later, and I think it would be best if it was sooner so we can get the fall over with and get back onto firm ground.

I am pissed off about the bailout. I keep hearing things on the news along the lines of 'OMG, there might be a recession', or 'if we do this, maybe we can avoid a recession'. It irritates me. I graduated from MIT in 1992 in the middle of a recession, and that really sucked at the time, but I did get work and by the end of 1994 I had a great job that I really liked. Yes recessions are unpleasant, but they aren't terrible. Mostly the companies that go under are the ones that deserve to. What scares me is inflation. I may have been a little kid at the time, but I remember the 70s. I remember how much the price of candy bars went up. I also remember that the late 70s were when my mom went back to work. She'd stopped work after my parents bought the house, but a few years later our spending power as a family had deteriorated so much that she had to go back to make ends meet. She wasn't alone. No ones wages were keeping up with double-digit inflation (hardly surprising), and a lot of mothers joined the work force. They stayed in the workforce too. How many single income families do you know? I would argue that while we recovered from various recessions just fine, we have not recovered from high inflation rates. Current economic policy is highly likely, in my opinion, to lead to much higher inflation, and that is going to be very unpleasant in the long run. I would so much rather just have a nice short but deep recession right now and get it over with.
Collapse