Mom wanted a picture of Margaret in the dress. As a knitter myself I could well understand this. When you make something special you want photographic evidence of it being used, especially if the intended recipient is small and cute. Margaret wore the dress and I took a photo. I called Mom to let here know that the photo was online. It was then that I learned when Mom had found the time to make the dress... some 38 years ago.

Mom admitted that she had made the dress when she was pregnant with me, but then never put it on me or my little sister because it was wool and she was afraid of ruining it. This is where I differ from my mom. If I put in all that effort I want to use the hand-made item. I understand being careful with it, but not to the point where you are afraid to use it at all. I think part of it is that Mom doesn't have any friends who knit. I know it's stereotypical for grandmothers to knit, but the truth is that most women in Mom's generation do not knit. They didn't knit when they were younger, and they don't knit now. It's women my age and younger who make up most of the knitters these days. It's easier to use the good stuff when you know of other people who have successfully washed wool without woe. So Margaret got to wear her vintage baby dress. She also got to spit up on it. I put the dress in a mesh bag and put it through the washing machine on delicate cycle with cold water and a drizzle of shampoo instead of detergent, and it came out just fine. She will wear it again. 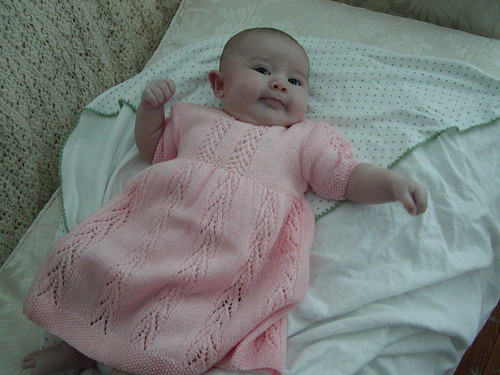