It's not really a news flash that I am tough on shoes. I have two pairs of clogs that I've basically been wearing pretty exclusively since a few weeks after the embryo got settled in. They are identical except for color. Or rather, they were identical.... 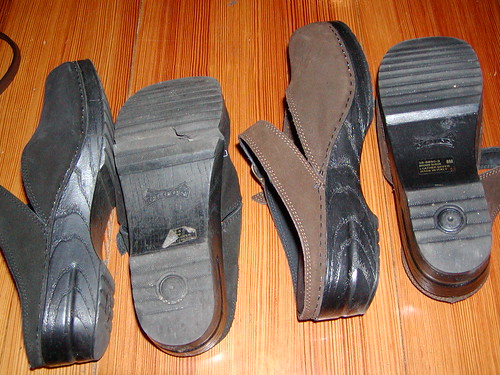 It would seem that the black pair (which sees more wear on account of it matching more outfits) has developed the feature of being split-soled. That's not something one normally sees in clogs. It's more pronounced on the right one, but the left one has a split that is almost as deep in the exact same place, right where the ball of my foot is when I wear them. I don't think it's a great mystery as to how they got that way. It's not as impressive as the time I bent the steel shank in one of my Supadance 1016s, but I was still a little startled when I noticed.

In other news, my husband should not mock my ability to use up yarn. Of course maybe it was his plan to make me use up 3.5 skeins in just a few hours... 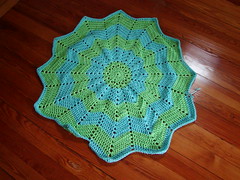 It's not quite done yet, but only because I have other more interesting projects that I am also working on. Of course the problem with my husband is that he is clever enough to note that the thicker the yarn the faster the skeins disappear, thus he is less than impressed with my ability to crochet through so much worsted weight is so short a time. Actually, I suspect that I have fallen victim to his nefarious plot to make me deal with the yarn that has been cluttering my study. That's what I get for marrying a clever man.

Actually, it's nice to do some mindless crochet after all the lace knitting I've been doing lately. Lace is lovely and all, but it does take a lot longer and there is so darn much yardage on those lighter weight skeins. Dead-easy double crochet burns through the yarn and gives you finished product fast, in this case an almost-done afghan for George & Brittany's new baby to be. It's so fast it feels like cheating.

Other yarn point of note: 100% silk takes forever to block in humid weather. It's over a day later and my new shawl is still damp. 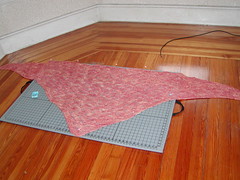 It has until Friday to get dry, that's when I want to wear it. Warren and I plan to spectate at The Yankee Classic and I need something spiffy to help disguise the fact that the only dresses that I have that fit me are from Gap Maternity.
Collapse