I have discovered the holy grail of physical fitness, an exercise regime that is simple and guaranteed to work. Step 1: Join a gym with nice shower facilities. Step 2: Pour concrete down the drain in your shower at home. It’s just that easy.

As I think I mentioned a few posts ago, we’ve been having plumbing issues. Our shower has gone from draining a bit slowly to draining really slowly, to not really draining at all. It is now draining again, but who knows for how long? Anyway, one major side effect of all this is that the worse the plumbing got, the more often I went to the gym, so that now I am going every single day because I don’t dare shower at home. At the gym I do my world’s lamest workout before my shower. I just can’t bring myself to get dressed and drive two miles to the gym for the sole purpose of taking a shower. It just seems like too much of a waste of time to skip the workout. Also, I’m not ready to admit to the people at the gym that I am unmoved by their state of the art fitness stuff and that I only love the place for it’s continuous supply of hot water and miraculously clear drains. I have to get myself on the treadmill and do the world’s lamest workout for form’s sake.

In the process of all this I have discovered something remarkable about the world’s lamest workout: it’s effective. It’s actually a little shocking just how effective it is. Remember a week and a half ago when I was whining about how bad I felt? Well, I feel a lot better now, in spite of having done something terribly foolish to my pelvis. The difference is that I have gone and done the world’s lamest workout every single day instead of just half the days. It makes a huge difference.

Perhaps I should save the details and publish some fitness book and try to pass myself off as the next fitness guru, but I don’t think I could do the book tour with a straight face, so I’ll just divulge the details now. The World’s Lamest Workout ™ is to program the treadmill for 20 minutes at 3.0 miles per hour with no incline. That’s it, a 20 minute mile, plus a bit of extra walking at a slower pace at the end because the treadmill automatically adds on a bit of cooldown. For reference, my pre-IVF workout involved 30 minutes at 4.5 miles per hour on a medium to hard hill program. (Walking up an incline is noticeably harder than walking at the same speed on a level surface, so the hill program makes a huge difference.) Probably the best way to measure the difference between the lame workout and the old workout is that the lame workout burns about one sixth of the calories that the old workout did in spite of me getting credit for the extra weight I’m carrying. So yes, it is very, very lame as a workout and yet it is obviously hugely better than just doing the walking I do as part of my everyday life.

Obviously I am going to have to take some time off from the gym immediately post-partum, but this whole thing has changed my thoughts about how much time I think I might want that to be. I think the limiting factor might be how soon I think I can trust Warren with sole custody of a newborn; the gym nursery won’t take infants under six weeks of age. Obviously I’ll need to do something more aggressive post partum to lose the extra pounds and get back into shape. I know that I’ll have to work for a while to get back up to the old workout. At the same time, the past couple of weeks has changed my mind about how much of a workout it is worth going to the gym for. Six months ago I would never have bothered to go to the gym if all I thought I was capable of was a 20 minute mile. If I was too tired/headachey/crampy to attempt anything more than the World’s Lamest Workout, I probably would not have bothered to go. Now I know that a really lame workout is quantifiably better than no workout at all. It might not actually change my behavior in the long term, especially when I have a small child to manage, but it does remove a potential rationalization for being lazy.

Everything you have ever heard about how unpleasant it is to be pregnant when it is hot outside is true. Heat has always made me cranky, so you can imagine what it does to me in my current condition. Yesterday when the air conditioning seemed like it was barely denting the heat wave I made an inappropriate remark about tearing my clothes off to my gamer friends. Luckily for me I have smart, understanding friends. I also have a husband who deserves danger pay for living with me during a heat wave. I'll never know how my mother survived an entire summer of being pregnant in NYC with no air conditioning.

Things are less hot today, which is good. Yesterday when I was delivering the birth plan to the OB, the one that says ten different ways how we don't want any interventions, was also on the verge of begging to be induced right then. Warren had to warn me that I wasn't exactly sending a consistent message. I'm less desperate now, but I still would probably jump for joy if my water broke in the next five minutes. Sadly, I suspect that it will be July before we see this baby, what with my complete lack of anything even resembling a contraction.

I am officially huge. My belly button is gone. It's a good thing I have that laproscopy scar to remind me of where it should be. 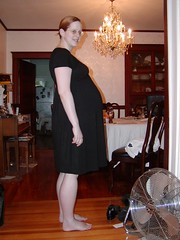