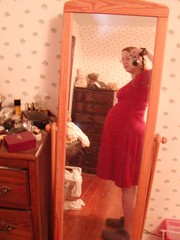 The pregnancy is still going well, though things are getting a bit uncomfortable. The fetus has made repeated attempts to crawl up inside my rib cage. (Well, that's what it feels like anyway.) I sure hope the fetus figures out that the escape route is in the OTHER DIRECTION, if not, I have a feeling that we'll see a scene that's all too reminiscent of Alien a few weeks from now.

I have discovered something interesting about my hip pain. I've been having hip soreness since the end of the first trimester. This is normal, expected, and even generally a good thing. My pelvis is relaxing and rearranging itself so that I can fit a baby through there. The achy out-of-joint feeling has generally tended to be worse on the right side, especially lately. This weekend it got really bad, bad enough that I made Warren carry the last bag of garbage out because I honestly wasn't sure I could manage it without breaking my neck. It continued to be really bad as I hobbled into work on Monday. Then Monday evening the fetus made a series of strong movements, and a short time later I noticed that my right hip had suddenly gone from the painful and barely functional state it had been in to just being tender. It finally dawned on me that perhaps the instances of bad hip pain are due to bad positioning. I'm not sure if I can do anything useful with this theory, but I'm certainly inclined to try and shift the fetus the next time my hip goes all gimpy on me.

Ages ago, back when I was still taking my temperature every morning because I was deluded enough to think charting my cycles would help me get pregnant*, I read some of the crunchy granola books on giving birth that were loaned to me. I generally like the crunchy granola midwifery books. I'm a big believer in western medicine as a cure for what ails you, but I'm also inclined to believe that doctors don't know everything and newer isn't necessarily better. To put it in more personal terms, I love love love high tech medicine for getting me pregnant, but I would prefer considerably less intervention than is normal when it comes to getting the baby back out (assuming no terrible complications). One of the things that I am now in a good position to appreciate is what a terrible position laying on your back is for giving birth. Honestly, as soon as I get into bed these days I feel like a beached whale. I'm generally fine when standing or sitting, but being flat on my back is not so good. Being on my side is OK, but it's still a huge effort to shift at all. Things are only going to be worse six weeks from now, so why on earth would any pregnant woman want to be in that position? As I understand it, giving birth will likely require some physical effort on my part, and I just can't imagine putting in that effort in a position where I feel so awkward. Luckily Mt. Auburn is supposed to be pretty midwife friendly, so hopefully I won't need to employ my look-of-death to avoid the beached whale position.

I'm sure there was more I wanted to say about where I am in the whole pregnancy thing. Mostly I'm starting to really look forward to the birth and having the baby on the outside. On the other hand, I was reminding myself today that this is a special time too. It may get annoying and uncomfortable at times, but it is still amazingly cool to have my soon-to-be baby moving around inside of me, part of me and yet distinct. Those who insist on drawing bright lines to say where a person begins and ends as an individual are so totally missing the point. We can be one being and two beings at the same time and it is not an annoying contradiction, it's wonderful.

*Just for the record, I think charting your cycles does help if you can get pregnant the traditional way. I'm just saying I was deluded because I thought I had a chance of getting pregnant naturally. I know better now.
Collapse