I'm 30 weeks pregnant as of today. This is a huge milestone. Babies born after 30 weeks gestation tend to make it without serious disabilities. Of course making it to 40 weeks best.

In the early days I thought of 30 weeks as a huge deal. Now that I'm here it's not anymore. In recent weeks I've been pretty sure that I was going to make it. Infertility messes with your head, destroys any illusion that you may have had that bad things only happen to other people. This fetus, though, won't stand for being doubted. Together Warren and I made 19 embryos over the course of four IVF cycles, and that's not counting anything that might have fertilized and never made it on any of the many many lower tech attempts. This one is the one who made it to the status of fetus. This one is the one who absolutely will make it to a live birth and beyond, at least that's how I choose to interpret the frequent kicks to my various and sundry internal organs. At this point any time I even ponder the possibility or maybe worrying about the health of the fetus, I am chastised by a sound kick to the bladder and I am getting the message loud and clear. You have ten more weeks, give or take, before I unleash this one on the world. Don't say I didn't warn you. 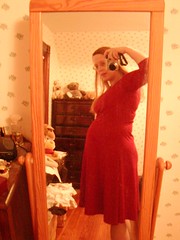