I am 25 weeks pregnant as of today.

I am still loving being pregnant, but there are some things that make life interesting. At last Wednesday’s dance lesson I noticed that my right hip felt like it was out of joint. I’ve had hip soreness of varying degrees for the past three months at least (perfectly normal), but the feeling that the hip was out of the socket was a bit new. If only it would pop, I was sure the sensation would go away. Of course it didn’t. In case you every need this information, I should let you know that it is difficult to concentrate on doing a good feather step when your right hip feels like it is not in it’s socket. A few days later it did start popping, but alas, that did not reduce the out-of-joint feeling at all. I suspect that the socket just isn’t exactly the same as it used to be, what with my entire pelvic area getting rearranged if anticipation of several pounds of baby coming through there, and I suspect the feeling will not go away until after that happens. As of today the feeling has spread to my left hip as well.

In our lesson last week Suzanne asked me if I felt that my balance was affected by the pregnancy because Didi kept mentioning that it affected her balance when she was pregnant. (Didi was for many years the top female amateur competitor in the area and famously danced competitively through three pregnancies.) I have not noticed any effect on my balance whatsoever. Aside from the BOUSs, all the excess weight is sitting exactly on my center of mass. Then again, I tend not to be limited by balance in any of the physical stuff I regularly do, so it’s entirely plausible that I would remain oblivious to any affects on my balance. Stamina and flexibility have been the main areas to take hits I think the flexibility is another side effect of the pelvic rearrangement thing; everything is shifting a bit down there and the surrounding muscles are tightening up in alarm. I must get to the gym more often and spend quality time on the stretching equipment, especially the thing that looks like a spiderweb made out of bungie cords.

It was at least a month ago that she told us, but Suzanne had a great Didi story that I must share. I don’t think Suzanne meant it as a funny story, just an illustration of sympathy for the hip soreness, but it cracks me up a bit, so I must share. Didi also had hip soreness. It got so bad that she would arrive at dance lessons on crutches. (Insert brief pause.) It did not occur to Suzanne until she told us this story that anyone in enough pain that they were going around on crutches might sensibly decide to skip the dance lesson. Of course you would take the lesson! By the way, I find this story even more amusing because I know what Didi’s profession is – she’s an orthopedic surgeon. Why yes, there is a certain amount of insanity in the ballroom community. Personally, I have been taking it extra careful with my hips because I know that pregnant women are at higher risk for tearing or pulling ligaments, due to exactly the same effect that is causing the hip soreness.

The fetus continues to be active at various points during the day. When I can I just sit still, relax and concentrate on feeling her move. I can’t help but smile when I do this. She is my secret teammate and coconspirator, and she is mine mine mine. For the next fifteen weeks I get to keep her with me every second of every day, and I would not trade a second of that, not for all the tea in China. 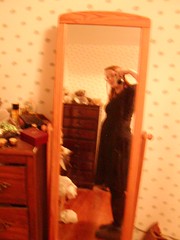