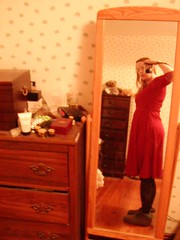 I'm 23 weeks pregnant as of today.

The brown spotting from Sunday continues. I am hoping that it will cut that out real soon now, but as anyone with girl parts knows, this sort of thing can linger. Of course if it stops and then starts up again I will have to have a fresh almost-freak-out about it, which would be pesky.

The fetus has been moving more and more often. It is the most amazing feeling. I sometimes mock-complain to Warren about it, saying, 'hey, someone is poking me!'. It's a private joke because he knows I'm not really complaining at all. It's distracting, but not uncomfortable, and it's almost always a welcome distraction. Mostly I say that to him when it happens during Warcraft playing time as a heads-up to the fact that the game no longer has my undivided attention. When I can, I love nothing better than to close my eyes and just pay attention to the movement. You have to feel sorry for the men, they are really missing out.

Just very recently I have started talking to the fetus when I am alone. I don't really know why, I just feel like doing it. Of course I know that by now her hearing has developed and she is capable of starting to learn to recognize my voice, but that's not what is prompting me to do it, at least not consciously. All I know is that I want to talk to her, so I do. Hang in there little one, we're getting close to some important milestones.
Collapse