I'm 17 weeks pregnant. At a dance a couple of weeks ago I got my first indication that I was starting to show enough that people who didn't know suspected, but were afraid to ask just in case it was just it was Ben & Jerry's and not a baby. The bulge is there, but the bust is still bigger. My theory is that until the belly overtakes the bosom (which has declared it's manifest destiny), those who haven't been getting the blow by blow on this blog will continue to be uncertain.

Not that I blame them. I see the bulge unclothed, a state which makes it more obvious, and I still have my doubts. Is the fetus still alive? It's been days since I've thrown up and the hip soreness is not as bad as it was. I have another eight days to wait for my next ultrasound, which is a long time to be thinking the Dead Baby Thoughts. Mind you, milder symptoms are the only indication that anything might be amiss. I really would be happier if I were throwing up right now.

On the bright side, in spite of looking like I've just devoured three gallons of mint chocolate chip I am feeling better about how I look than I have in two years or more. 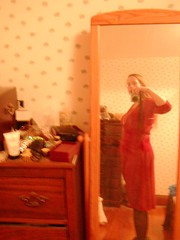