I once read in one woman's blog that she like reading infertility blogs partly because infertiles would occasionally post about other things, like their jobs or better yet new shoes. Of course, then sometimes the women would get pregnant and eventually become moms too busy to buy new shoes for themselves. Since this blog has suddenly turned into all puking all the time (a record four times on Sunday!) it might be nice to post about shoes. 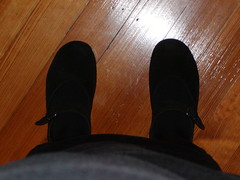 I have new shoes! I used to have a lot of shoes, but threw most of them away when I got married and moved in with my husband. We were renovating the upstairs and there was no room downstairs, so the surplus shoes went. Of course that was over seven years ago, but I've had a hard time finding shoes that meet my standards. I am also very hard on shoes, so attrition has been pretty much keeping up with a acquisition. Prior to the latest purchase I had one pair of fisherman's sandals, one pair of ballerina flats, one pair of brown high heels, and three pairs of boots (and some dance shoes, but they are only worn for dancing and thus do not count). The sandals are pretty clearly summer only in Boston. Likewise the ballerina flats I was finding just did not have enough sole to really be suitable for cold weather wear. This left me with one pair of shoes and the three pairs of boots for winter options. All of the boots have high heels. If I wanted something with less that a three-inch heel this winter I needed something new. I saw these in a catalog while looking for other stuff. I have never owned non-gardening clogs before, and I was a bit worried about their lack of a back, but other than the backlessness they looked practical while still feminine. That's an increasingly hard combination to find, so I took a risk. While the backlessness was initially disturbing, an adjustment of the buckle and a little practice proved enough to deal with it.

Of course the other stuff I was looking for when I found the clogs was larger clothes. (Here is where we devolve back into boring maternity stuff.) My wardrobe was already quite snug as a result of the weight I put on during my IVF cycles and my stubborn refusal to give in and buy new clothes. It did not take much uterine expansion to cause me to outgrow everything overnight. So I ordered a bunch of knit dresses in a size larger than what I normally take, and I went for styles that lacked a defined waist. I now have just barely enough "fat" dresses to get me through the week. I feel much better and was fortunate to find some styles I liked.

I had also ordered some queen sized tights when I was ordering the larger dresses. My normal nylons were driving me crazy. I do not actually recommend this as a solution. The queen size tights were much more comfortable, but the waistband was ending up around my rib cage, about two inches shy of my bra strap. This works for a while, but it feels funny and eventually becomes irritating. I later got some actual maternity tights, and they are so much more comfortable. Of course, they are over twice as expensive as the non maternity ones, so I'll be using the queens for a bit longer.

What led me to actually purchase the maternity tights was my need for new bras. It turns out that the online maternity stores actually had instructions for measuring yourself, and I happened to have a tape measure handy. This was all the excuse I needed. My old 34Bs were probably too small before the pregnancy, and they were getting smaller by the day. The tape measure and instructions led to one heck of a surprise. Long story short, I am now feeling quite comfortable in a 38E, and desperately awaiting the arrival of the rest of my order so I can ditch the 34Bs for the duration. Between the bras, a few pairs of tights, and some new panties I spent well over $300 on new underthings. It seems a little odd to need maternity underthings so early, but I do look pregnant when I'm undressed. Winter clothing will no doubt mask the belly for some months to come, but it's there. It's nice to see it so early, actually, after waiting so very long to get pregnant.
Collapse